A cynic might say that hacks on Philippine government websites are now so common that visitors are lucky to find their proper content. A new attack, on canaman.gov.ph, continues the trend: 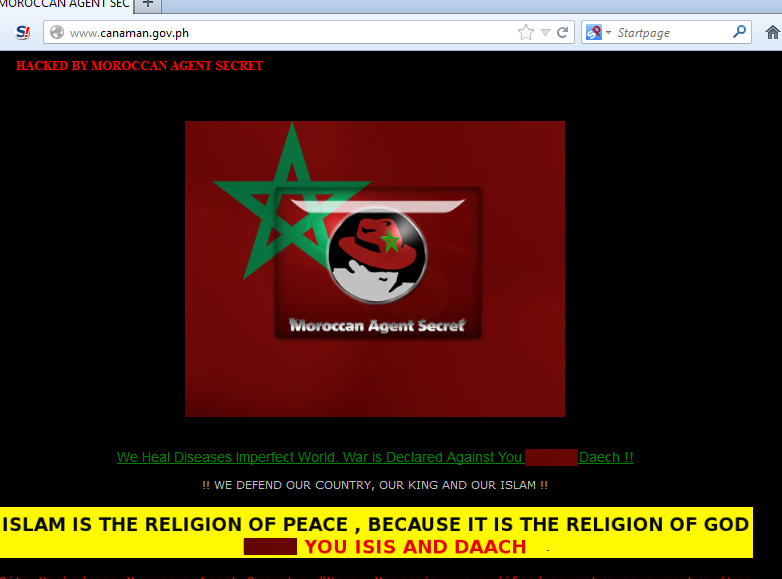 For hacktivists like Anonymous Philippines and Moroccan Agent Secret, this is a good means of voicing their opinions. For the Philippine Government, it’s an embarrassment: although the other hacked websites have been restored after the attacks, new hacks occur with such frequency that the government’s lack of security is repeatedly exposed.

The government is clearly unprepared for cyber attacks (Canaman.gov.ph also hosted a banking phish only last week, according to Malwarebytes), isn’t putting effective measures in place to prevent them, and doesn’t have a suitable cyber security plan in place – if indeed it has one at all.

Cyber security is essential for all organisations – not just governments. According to PwC’s Global State of Information Security Survey 2015, the Asia-Pacific region “reports a 13% decline in information security budgets in 2014. Respondents also report that financial losses due to security incidents increased 22% over 2013.”

With budgets falling and losses increasing, there’s never been a more important time for Asia-Pacific organisations to ensure that their cyber security solutions are efficient and cost-effective.

IT Governance, the global provider of cyber security products and services, will address the cyber security issues faced by Asia-Pacific businesses in a free webinar:

Join us on 20 March 2015, when cyber security expert Alan Calder – the founder and executive chairman of IT Governance – will take you through:

International standards collate the best practices of professionals around the world. This webinar will explain how you can take advantage of the collective wisdom of thousands of cyber security practitioners with the international standard for information security management, ISO 27001.